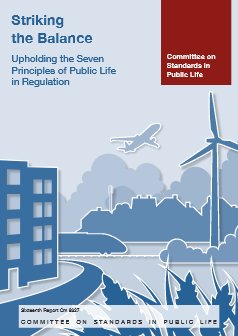 In a democracy, politicians and officials cannot just do whatever they please. Instead, they must comply with the principles of competent and fair administration.

In the UK, these principles are set out as Nolan's Seven Principles of Public Life. They were first put forward by the Committee on Standards in Public Life in its 1995 Report [1], and have since been restated in the Committee's 2016 Report Striking the balance [2], which reviewed the various regulators.

The Seven Principles of Public Life

The Principles of public life apply to anyone who works as a public office-holder. This includes all those who are elected or appointed to public office, nationally and locally, and all people appointed to work in the civil service, local government, the police, courts and probation services, NDPBs, and in the health, education, social and care services. All public office-holders are both servants of the public and stewards of public resources. The principles also have application to all those in other sectors delivering public services.

Holders of public office should act solely in terms of the public interest.

Holders of public office must avoid placing themselves under any obligation to people or organisations that might try inappropriately to influence them in their work. They should not act or take decisions in order to gain financial or other material benefits for themselves, their family, or their friends. They must declare and resolve any interests and relationships.

Holders of public office must act and take decisions impartially, fairly and on merit, using the best evidence and without discrimination or bias.

Holders of public office are accountable to the public for their decisions and actions and must submit themselves to the scrutiny necessary to ensure this.

Holders of public office should act and take decisions in an open and transparent manner. Information should not be withheld from the public unless there are clear and lawful reasons for so doing.

Holders of public office should be truthful.

Holders of public office should exhibit these principles in their own behaviour. They should actively promote and robustly support the principles and be willing to challenge poor behaviour wherever it occurs.

It seems that these principles are widely ignored, and that departures from competent and fair administration are commonly tolerated by citizens.