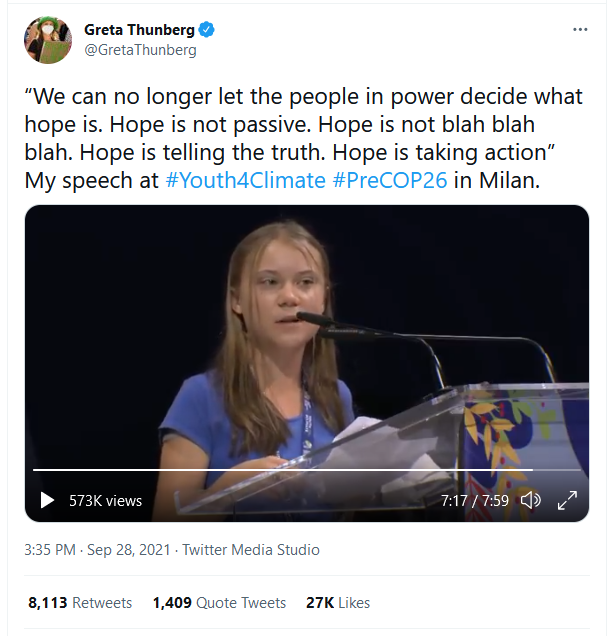 Greta Thunberg spoke at the #PreCOP26 #Youth4Climate Conference in Milan in September 2021.
Some key messages were

Hello, and thank you.

This is all we hear from our so-called leaders: words - words that sound great, but so far have led to no action.
Our hopes and dreams drown in their empty words and promises.
Of course we need constructive dialogue, but they've now had 30 years of blah bah blah and where has that led us?
Over 50% of all our CO2 emissions have occurred since 1990, and a third since 2005.
All this while the media is reporting what the leaders say that they are going to do instead of what they are actually doing.
and they are not holding leaders accountable for their action, or rather inaction.
and don't get me wrong, we can still do this - change is not only possible but urgently necessary, but not if we go on like today.
They say they want solutions, but you cannot solve a crisis that you do not fully understand
and you cannot balance a budget if you do not count all the numbers.
And as long as we ignore equity and historic emissions, and as long as we don't include consumption of imported goods, burning of biomass etc etc, and as long as clever accounting is one of the most efficient ways of reducing emissions, we won't get anywhere.

And the climate crisis is of course only a symptom of a much larger crisis - the sustainability crisis, the social crisis - a crisis of inequality that dates back to colonialism and beyond - a crisis based on the idea that some people are worth more than others and therefore have a right to exploit and steal other people's land and resources - and it is very naive to believe that we can solve this crisis without confronting the roots of it.

Right now we are still very much speeding in the wrong direction.
2021 is currently projected to experience the second highest emission rise ever.
Only about 2% of government recovery spending has been allocated to clean energy measures
And according to a new report by the UN, global emissions are expected to rise by 16% by 2030 compared to 2010 levels.
Our leaders' intentional lack of action is a betrayal towards all present and future generations.
The people in power cannot claim that they are trying because they are clearly not, as they continue opening up brand new coal mines, oilfields and pipelines, pretending to have ambitious climate policies while granting new oil licences and exploring enormous future oil fields, and shamelessly congratulating themselves while still failing to come up with even the bare minimum and long-overdue funding to help the most vulnerable countries deal with the impact of the climate crisis.
If this is what they consider to be climate action, then we don't want it.

They invite cherry-picked young people to meetings like this to pretend that they are listening to us.
But they are not - they are clearly not listening to us - and they never have - just look at the numbers - look at the statistics - the emissions are still rising - the science doesn't lie.

Further information on the points made by Greta Thunberg: