The UK Govenment is promoting its 'Net Zero Carbon 2050' strategy as the solution to the climate emergency, as if action can be delayed for years or decades - but the strategy is based on a series of deceits.

The truth is that the UK's fair share of the Paris-compliant global carbon budget runs out in 3 years, and this means urgent, radical action now.

Many campaigners are urging that the deceits are called out at every opportunity.

The global temperature rise due to climate change is fast approaching 1.5°, and climate change has gone from a crisis to an emergency as successive governments have failed to take the necessary and obvious actions [1]. The UK Government is promoting 'Net Zero 2050' [2][3] as a solution, but there are many problems with it including deliberate deceits.

Denying that climate change is an emergency

The UK's share of the residual global carbon budget will be used up at the end of 2024 (document 33), which means urgent radical changes.

The IPCC in its 2018 report [4] stated that "rapid and far-reaching transitions in energy, land, urban and infrastructure (including transport and buildings), and industrial systems" were needed, with a timescale of just a few years [5].

But Boris Johnson in his Foreword to the UK Net zero strategy [2] denied that rapid action is needed, saying "We will meet the global climate emergency but not with panicked, short-term measures as some have urged", and described a future with continued flying and driving without any major changes except how they are powered. 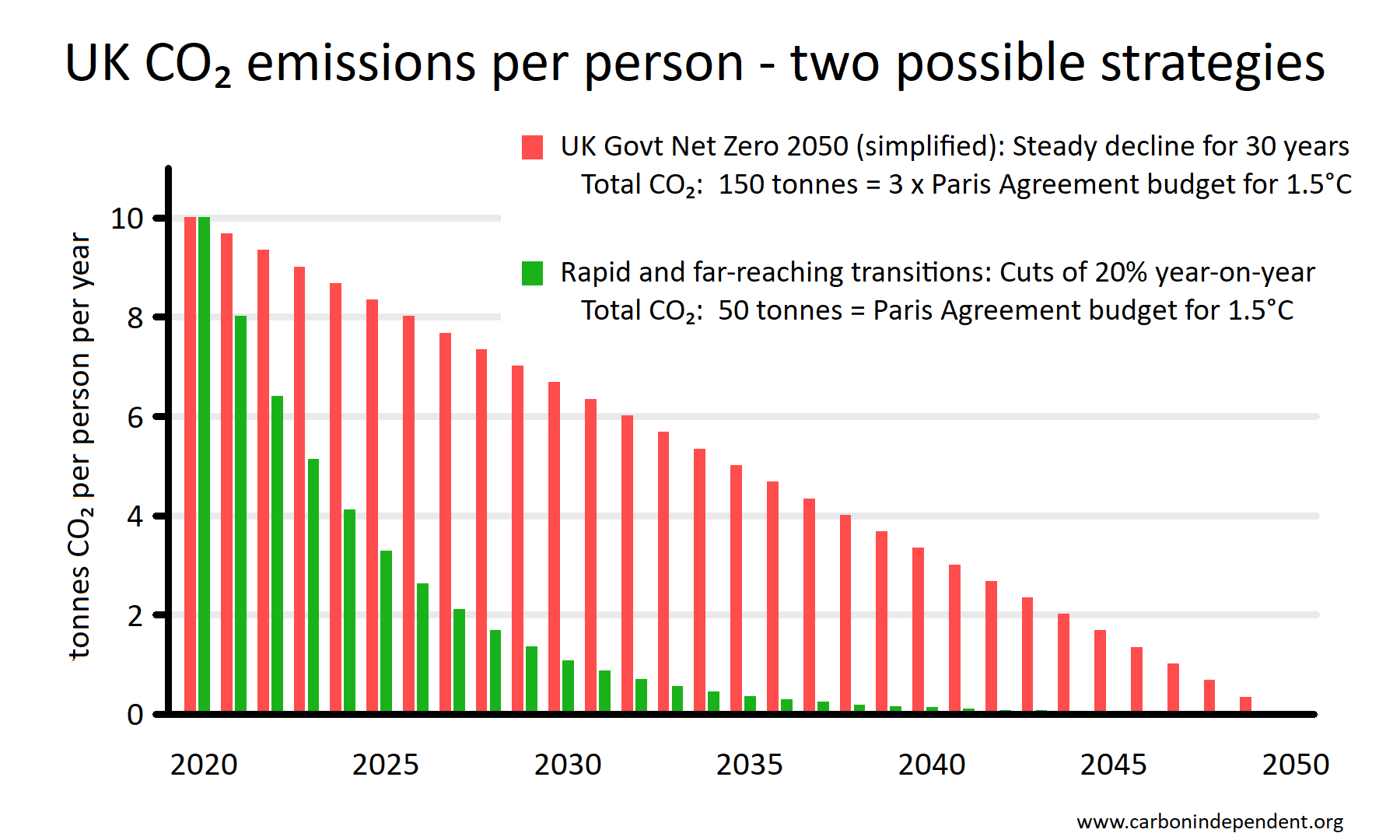 The UK Government portrays its Net Zero 2050 strategy [2] as world-leading, but it would lead to further emissions of 150 tonnes CO2 per UK resident, which is three times the residual 1.5° Paris-compliant carbon budget - see document 54.

The UK Government treats imports as zero-carbon - i.e. the CO2 emissions generated in the manufacture of an item are not included in the Government's UK quoted total [3]. This has resulted in a large reduction in the quoted UK total because so much of UK manufacturing has been outsourced overseas. Outsourcing of manufacturing to other countries is clearly not a solution to the climate emergency.

Omission of aviation and shipping

Aviation and shipping CO2 emissions are excluded from the UK Government's quoted total [3] even though they account for over 10% of the real total, and have increased in recent years. 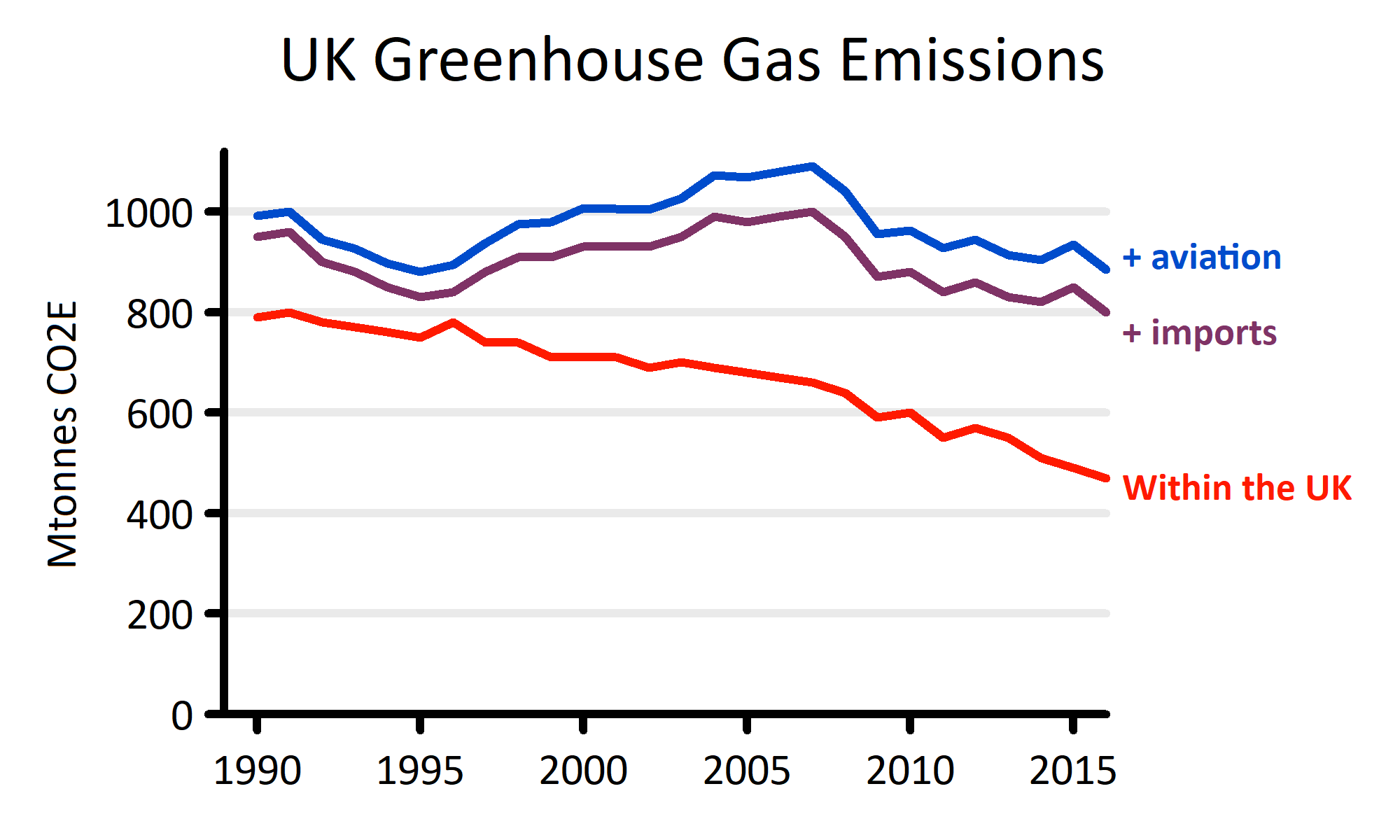 The UK Government persists in claiming a large reduction in emissions, e.g. '42% since 1990' [6]. This figure is obtained by counting only part of the total - by omitting imports, aviation and shipping, as above. When imports are counted, the reduction is only 15% [7], and including aviation, it is only 11% (see document 111).

Ignoring the Paris principle of equity between nations

The Paris Agreement [8] specifies equity between countries and that developed countries should cut emissions immediately whereas peaking of emissions will take longer for developing countries. As the UK's CO2 emissions are currently over double the world average, the UK should reduce its emissions much more quickly than the world average. The UK Government ignores this in its Net Zero 2050 timescale, and plans that the UK will take 3 times its fair share of the residual carbon budget - see document 122.

Electric vehicles are treated by the UK Government as zero carbon, but this is deceitful. If a vehicle powered by a petrol or diesel engine is scrapped and replaced by a new electric one powered from the grid, the additional electricity that is needed will be generated by a power station using either gas or coal - and the CO2 emissions will be similar to the those from the petrol or diesel used previously - see document 58.

The UK Government treats the UK's burning of biomass (principally wood) as zero carbon on the basis that trees will regrow and reabsorb the CO2 that has been released. But there are many problems with this and the scientific consensus is that burning biomass should not be treated as zero-carbon [9].

There is no naturally occurring hydrogen on earth, and so any hydrogen used, e.g. to power a vehicle, has to be made from another form of energy. Currently, most hydrogen used has been generated using a fossil fuel. There is a potential to generate more hydrogen by passing electricity through water (hydrolysis), but the additional electricity demand will be met by burning fossil fuels. Hydrogen is an energy carrier rather than an energy source. See document 97.

What should be happening

At this time of crisis in our civilisation, the UK needs an honest, conscientious government that operates according to the democratic principles of honesty, transparency, decision-making on best evidence, and accountability - as set out by the Committee on Standards in Public Life (see document 41).

Who is speaking up 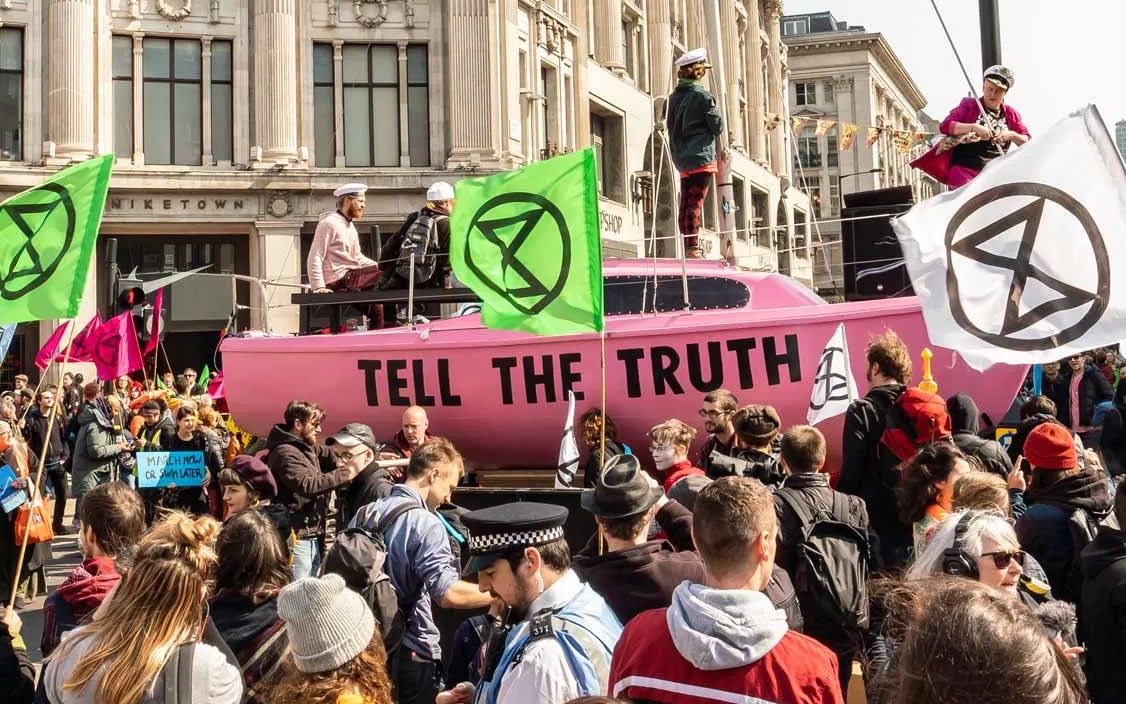 The UK Government's response to criticisms

The UK Government's climate strategy is riddled with deceits which appear designed to delay taking any real action on climate change.
Its persistence despite repeated criticisms and protests is a strong indication that the deceits are deliberate rather than inadvertent.
At a time when children, future generations and people around the world need urgent, radical action, it is despicable that the UK Government is being so dishonest.
Prosecutions for Misconduct in Public Office seem to be justified.

Greta thunberg has made a plea in her 2021 Earth Day video: 'Let's call out their bullsh!t' [11].
Decent people should comply with this plea, should call out the deceits and consider supporting the protests to highlight the dishonesty.
There should be zero tolerance of those in public office who are promoting the deceits or keeping quiet about them. Silence is complicity.

All of the images on this page are free of copyright restrictions.