Global emissions are rising The UK's share of the global CO2 budget runs out in 2 years UK Government fallacy: overclaiming the reduction in UK CO2 emissions

Common climate fallacies Planting trees is not a solution

Nolan's Seven Principles of Public Life Civil disobedience in a democracy: Q and A

Why progress has been so poor Decision making has been systematically poor All sections of society are failing It is a system failure rather than a failure of individuals Cognitive biases, flawed reasoning and fallacies dominate opinions and decision making Decision making needs to improve Effective versus ineffective campaigning Challenge fallacies, incompetence and misconduct Climate Urgency Realism or Denial score Climate urgency denial in UK Government scientists

Friends of the Earth is knowingly misleading its members and the wider public about the urgency of action in the climate emergency.
In paticular, it is endorsing the UK Government's Net Zero 2050 timescale of target emission cuts, whereas according to the scientific consensus, the timescale is at least three times too slow. Instead of the Net Zero 2050 strategy, urgent radical emission cuts are needed.
Friends of the Earth is contradicting and undermining the IPCC, and the climate scientists, economists and campaigning groups who are trying to publicise the need for urgent radical cuts in emissions.
Friends of the Earth needs to revise its messaging if it is to accurately inform its members and the wider public about seriousness of the climate emergency.

The 2022 Friends of the Earth High Court case

Friends of the Earth (FoE) (https://friendsoftheearth.uk) is the UK's largest grassroots environmental organisation. FoE in conjunction with two other organisation, Client Earth and the Good Law Project, brought a High Court case that the UK Government's climate strategy does not contain sufficient detail for it to achieve the target reductions. The verdict was given in July 2022 and was in favour of FoE and its partners, and the UK Government now has to revise its strategy. All three organisations celebrated the verdict as a success without qualification, and have used it in their mailings to supporters to appeal for more funding.

How much of a success was the High Court case? 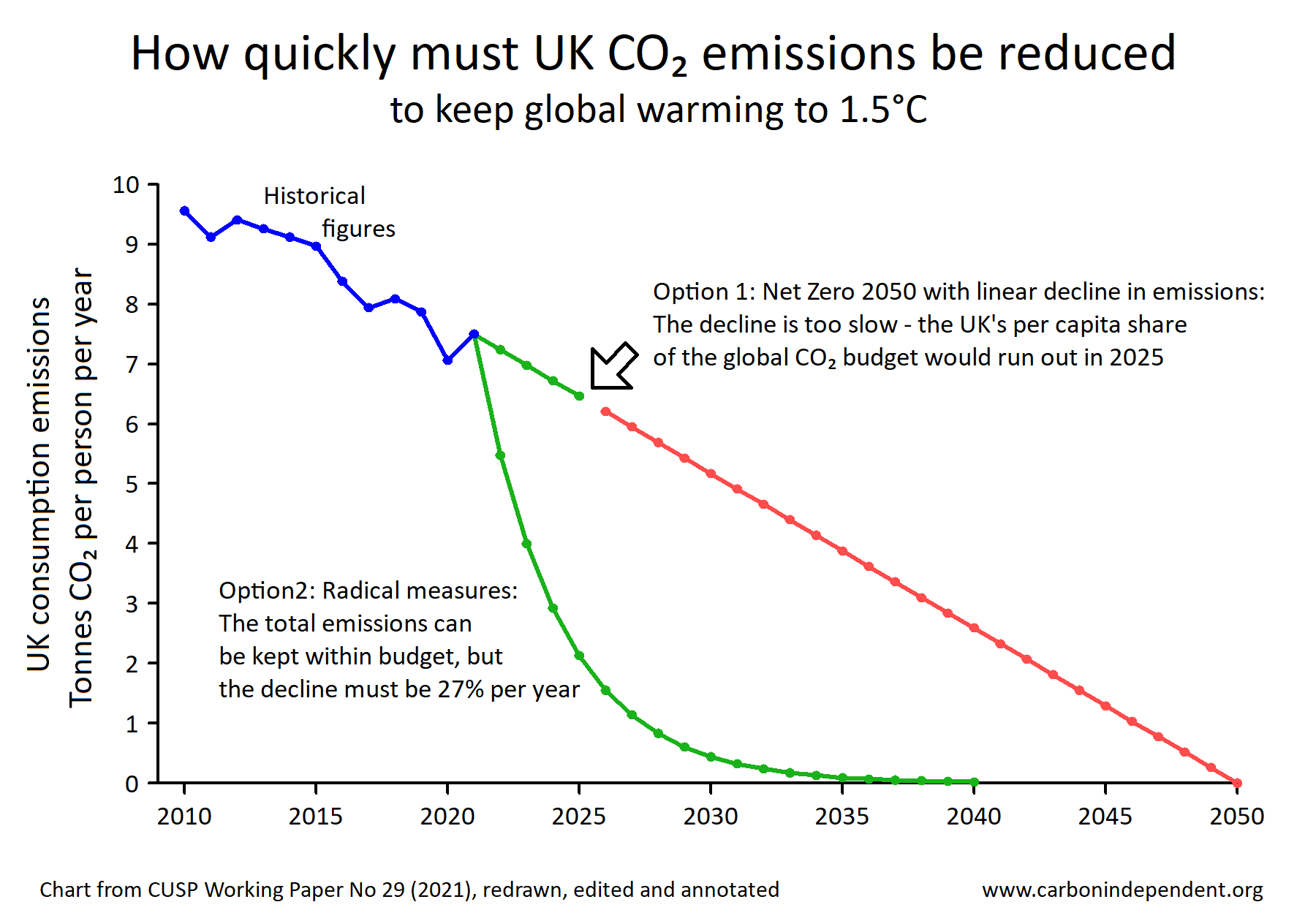 If the UK Government's timescale for emission cuts was acceptable, then the case would be a success. But the timescale of cuts is over three times too slow since it would take three times the UK's per capita share of the residual global CO2 budget for 1.5°C - as shown in the chart above (taken from the report from the Centre for the Understanding of Sustainable Prosperity [1]) and document 109.

So even if the UK Government revises its strategy to include sufficient measures to meet its targets, the strategy would still be unacceptably flawed because the targets are wrong.

Friends of the Earth and its partners are endorsing the wrong targets.

Contradiction of the IPCC and others

The UK Government's Net Zero 2050 strategy is based on a process of gradual deconarbonisation (the "gradual decarbonisation" fallacy - see document 142), but this is not in accord with the scientific consensus, which instead is that urgent radical cuts in emissions are needed.

This scientific consensus is being promoted by

FoE (with its partners) is contradicting and undermining these in its messaging via its mailings to its members and its press releases.

The need for consistency

Inconsistent messaging can mean that the public does not know who to believe or believes the wrong message.

Messaging that is inconsistent with the scientific consensus has been identified as a barrier that is delaying the radical action needed [5]. In response to this problem, Scientists for Global Responsibility (SGR) has launched its Science Oath for the Climate [6], which commits signatories to

"explain honestly, clearly and without compromise, what scientific evidence tells us about the seriousness of the climate emergency..."
and
"speak out about what is not compatible with the commitments, or is likely to undermine them".

Inadvertent or intentional contradiction of the IPCC?

Friends of the Earth is aware that the UK Government's emission reduction targets are not consistent with the climate science (these concerns have been repeatedly brought to its attention), but it continues to endorse and promote them. It is thus knowingly contradicting the iPCC, and knowingly misleading its members and the wider public.

There is a cacophony of inconsistent messaging about what needs to be done about climate change. FoE and its partners are adding to this.

If FoE and its partners want to support the UK's adherence to the Paris Agreement and efforts to contain global warming to 1.5°C, they should

Nature of these comments

The points made on this page might be seen as hostile criticism, but that is not how they are intended. All three organisations do some excellent work, and so lapses should be brought to their attention, and (if necessary) to the public's attention.

The comments made here are intended as "critical friend" feedback, analogous to peer review, as part of the process of policy science, working towards a robust evidence-based consensus on what needs to be done.

Climate urgency denial is a major barrier to progress on climate change (see document 50) and so climate urgency fallacies should be identified and eliminated.