Several kinds of misthinking are common or universal in human decision making. People are generally unaware of them and tend to think of themselves as rational beings.

Flaws in our understanding of the world

Although we have a strong impression that we see the world as it is, there are in reality many ways in which our brains' attempts to make sense of the world can end up misleading us.

Optical illusions are a simple example. The red lines in the upper image [1] are in fact straight and parallel - and the squares labelled A and B in the lower image [2] are in fact the same shade of grey. 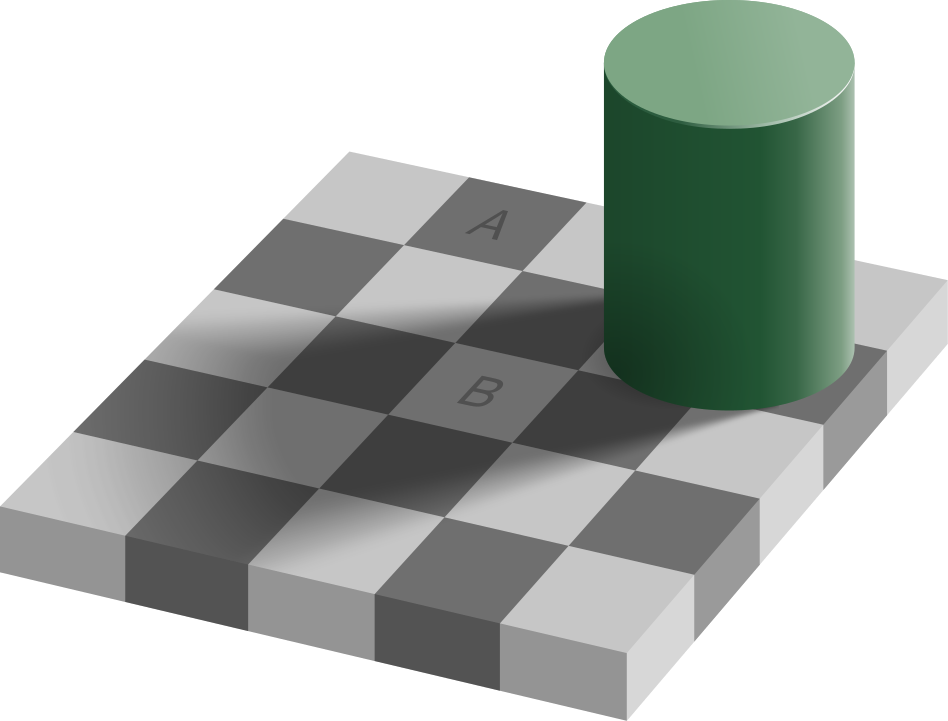 The squares labelled A and B are actually the same shade of grey!
A second example is that at one time it was thought that the sun orbited the earth. This view was so strongly held that Galileo was prosecuted by the Roman Catholic Church, was threatened with torture, and at his trial was sentenced to house arrest for the rest of his life for merely discussing the alternative heliocentric view of Copernicus [3].

Some more subtle flaws in mental processing are the cognitive biases.

Overconfidence is probably the most widely known - with a common example being that many surveys have found that most drivers think they are better-than-average drivers, which could not possibly be true. For example, in a 2018 survey, 73% of US drivers considered themselves to be better-than-average drivers [4]. Overconfidence is considered to be the most damaging bias by Daniel Kahneman, who was awarded a Nobel Prize for his work on cognitive biases [5]. Overconfidence is particularly dangerous if people are unaware of it and take no precautions to combat it.

There are many other cognitive biases, including wishful thinking (optimism bias) and confirmation bias - Wikipedia lists dozens [7]

There are numerous possibilities for error in how research is carried out and in how results are interpreted.

A second common misunderstanding is the association-implies-causation fallacy.

There is an extensive literature on research errors and how to avoid them. The large number of potential pitfalls means that much care is needed in carrying out research and translating it into practical application.

There are numerous fallacies in debating that can contribute to wrong decisions being made, e.g.

Climate denial can be categorised [8] as

The consequence of all the cognitive biases and other flaws in understanding and discussing the world is that it is easy to draw a wrong conclusion. Once groupthink is involved, it is easy for people to form groups that distrust each other, and for people to become polarised. Add in unscrupulous politicians and a biased media and fallacies can become established and entrenched.

Those with different views to a group can be dismissed as

The end result is a failure to reach a consensus and wrong decisions. This is not a good way for society to approach difficult problems.