Global emissions are rising The UK's share of the global CO2 budget runs out in 2 years UK Government fallacy: overclaiming the reduction in UK CO2 emissions

Common climate fallacies Planting trees is not a solution

Nolan's Seven Principles of Public Life Civil disobedience in a democracy: Q and A

Why progress has been so poor Decision making has been systematically poor All sections of society are failing It is a system failure rather than a failure of individuals Cognitive biases, flawed reasoning and fallacies dominate opinions and decision making Decision making needs to improve Effective versus ineffective campaigning Challenge fallacies, incompetence and misconduct Climate Urgency Realism or Denial score Climate urgency denial in UK Government scientists

The UK Government persistently claims it has achieved a fall in UK CO2 emissions of over 40% since 1990, but the real fall is only about 11%.

The UK government has continued with its claims despite repeated criticism, which suggests that the fallacy is a deliberate attempt to deceive.

How does the UK Government get its figures?

The figures claimed by the UK Government are obtained by

Examples of the UK Government's claims

What are the actual figures? 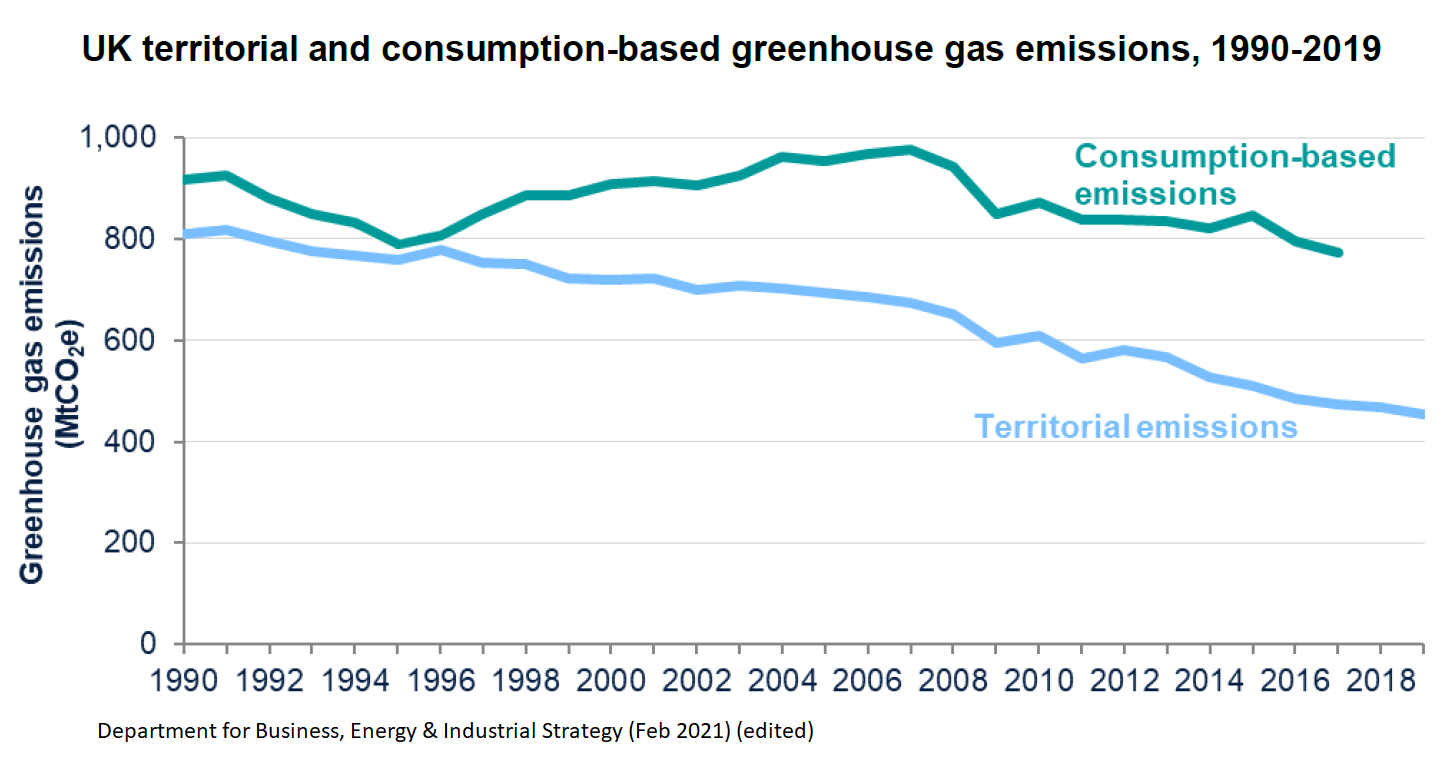 The chart shows the changes in UK greenhouse gas emissions since 1990. It is an edited version of a chart published by the UK Department for Business, Energy and Industrial Strategy [3]:
The actual fall including aviation but excluding shipping can be estimated as 11% (from 990Mt in 1990 to 880Mt in 2016) - see Appendix.

Why should imports and exports be included?

Over the last three decades, much manufacturing of items sold in the UK has been transferred from the UK to overseas, especially China and India. The items are manufactured only because of the purchasing in the UK. It is clearly of no benefit to tackling the climate emergency to merely transfer manufacturing from one country to another - the world total emissions is unaffected, or might actually increase due to the transport emissions.

The UK Government puts much emphasis on the UK "leading the world" in emission reduction - but it is not true. It is major fallacy on an issue of vital importance. The false claims have continued despite the objections. It is not just a single aberration but appears to be systematic institutionalised deceit.

This fallacy is one of several UK Government climate fallacies - see document 106.

Who is speaking up about the fallacy?

Who is repeating the fallacy?

How is the UK Government responding to the criticisms?

It does not respond, which suggests that the fallacy is deliberate. If the Government is committed to high standards of administration, there should be transparency and accountability.

People who care about basing policies on facts and fairness should

The figures for emssions from aviation by UK citizens are obtained from
Uncertainties include how much fuel is used taken on at refueling stops, and how many UK citizens make a short flight to a European airport as the first leg on a long distance flight.