At the launch of the latest IPCC report in April 2022, United Nations Secretary-General António Guterres accused governments of lying, and said that there is a need to create a grassroots movement that cannot be ignored. 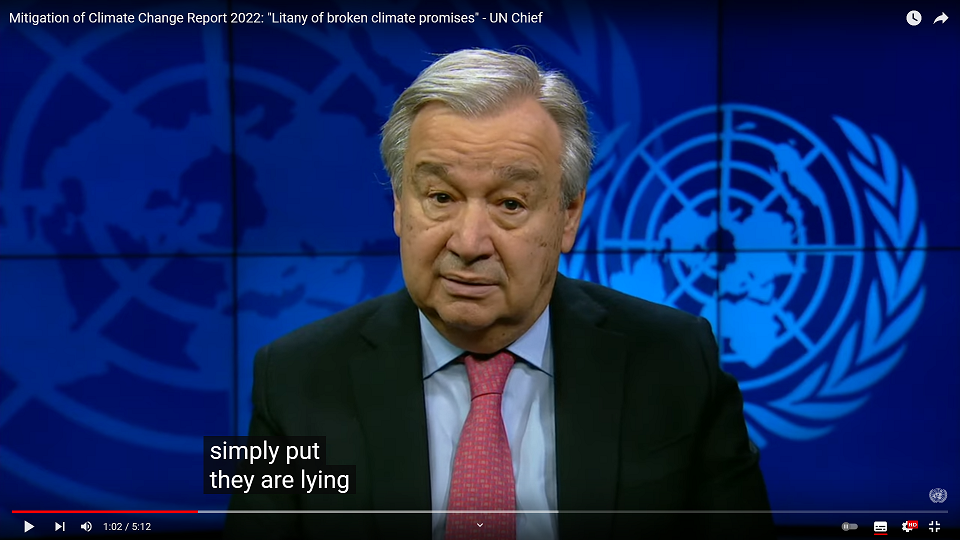 The remarks were made at the launch [1] of the latest report from the Intergovernmental Panel on Climate Change (IPCC) in April 2022 . It was the report of Working Group 3 concerning emission reduction [2]. The first two reports on the physics [3] and the impacts [4] were published in August 2021 and February 2022. The three reports are the completion of a 5-yearly cycle of work summarising thousands of research publications.

Some key quotes are

The full transcript is appended below.

The UN video is at https://www.youtube.com/watch?v=P8rlLaT8v4Q.

Evidence of lying by the UK Government
Fallacies

The full transcript is

The jury has reached a verdict.
And it is damning.
This report of the Intergovernmental Panel on Climate Change is a litany of broken climate promises.
It is a file of shame, cataloguing the empty pledges that put us firmly on track towards an unlivable world.
We are on a fast track to climate disaster:
Major cities under water.
Unprecedented heatwaves.
Terrifying storms.
Widespread water shortages.
The extinction of a million species of plants and animals.
This is not fiction or exaggeration.
It is what science tells us will result from our current energy policies.
We are on a pathway to global warming of more than double the 1.5-degree limit agreed in Paris.
Some government and business leaders are saying one thing - but doing another.
Simply put, they are lying.
And the results will be catastrophic.
This is a climate emergency.
Climate scientists warn that we are already perilously close to tipping points that could lead to cascading and irreversible climate impacts.
But high-emitting governments and corporations are not just turning a blind eye; they are adding fuel to the flames.
They are choking our planet, based on their vested interests and historic investments in fossil fuels, when cheaper, renewable solutions provide green jobs, energy security, and greater price stability.
We left COP26 in Glasgow with a naive optimism, based on new promises and commitments.
But the main problem - the enormous, growing emissions gap - was all but ignored.
The science is clear.
To keep the 1.5-degree limit agreed in Paris within reach, we need to cut global emissions by 45 percent this decade.
But current climate pledges would mean a 14 percent increase in emissions.
And most major emitters are not taking the steps needed to fulfil even these inadequate promises.
Climate activists are sometimes depicted as dangerous radicals.
But the truly dangerous radicals are the countries that are increasing the production of fossil fuels.
Investing in new fossil fuels infrastructure is moral and economic madness.
Such investments will soon be stranded assets - a blot on the landscape, and a blight on investment portfolios.
But it doesn't have to be this way.
Today's report is focused on mitigation - cutting emissions.
It sets out viable, financially sound options in every sector that can keep the possibility of limiting warming to 1.5 degrees alive.
First and foremost, we must triple the speed of the shift to renewable energy.
That means moving investments and subsidies from fossil fuels to renewables, now.
In most cases, renewables are already far cheaper.
It means governments ending the funding of coal, not just abroad, but at home.
It means climate coalitions, made up of developed countries, multilateral development banks, private financial institutions, and corporations, supporting major emerging economies in making this shift.
It means protecting forests and ecosystems as powerful climate solutions.
It means rapid progress in reducing methane emissions.
And it means implementing the pledges made in Paris and Glasgow.
Leaders must lead.
But all of us can do our part.
We owe a debt to young people, civil society and indigenous communities for sounding the alarm and holding leaders accountable.
We need to build on their work to create a grassroots movement that cannot be ignored.
If you live in a big city, a rural area, or a small island state;
If you invest in the stock market;
If you care about justice, and our children's future;
I am appealing directly to you:
Demand that renewable energy is introduced now - at speed and at scale.
Demand an end to coal-fired power.
Demand an end to all fossil fuel subsidies.
Today's report comes at a time of global turbulence.
Inequalities are at unprecedented levels. The recovery from the COVID-19 pandemic is scandalously uneven.
Inflation is rising, and the war in Ukraine is causing food and energy prices to skyrocket.
But increasing fossil fuel production will only make matters worse.
Choices made by countries now will make or break the commitment to 1.5 degrees.
A shift to renewables will mend our broken global energy mix and offer hope to millions of people suffering climate impacts today.
Climate promises and plans must be turned into reality and action, now.
It is time to stop burning our planet, and start investing in the abundant renewable energy all around us.