Climate emergency ten-point action plan Why progress has been so poor Decision making has been systematically poor All sections of society are failing It is a system failure rather than a failure of individuals Cognitive biases, flawed reasoning and fallacies dominate opinions and decision making Decision making needs to improve Effective versus ineffective campaigning Challenge fallacies, incompetence and misconduct Climate Urgency Realism or Denial score Climate urgency denial in UK Government scientists

Climate change: the basics Global emissions are rising and governments are failing Simple solutions for the climate crisis, which should have been implemented already 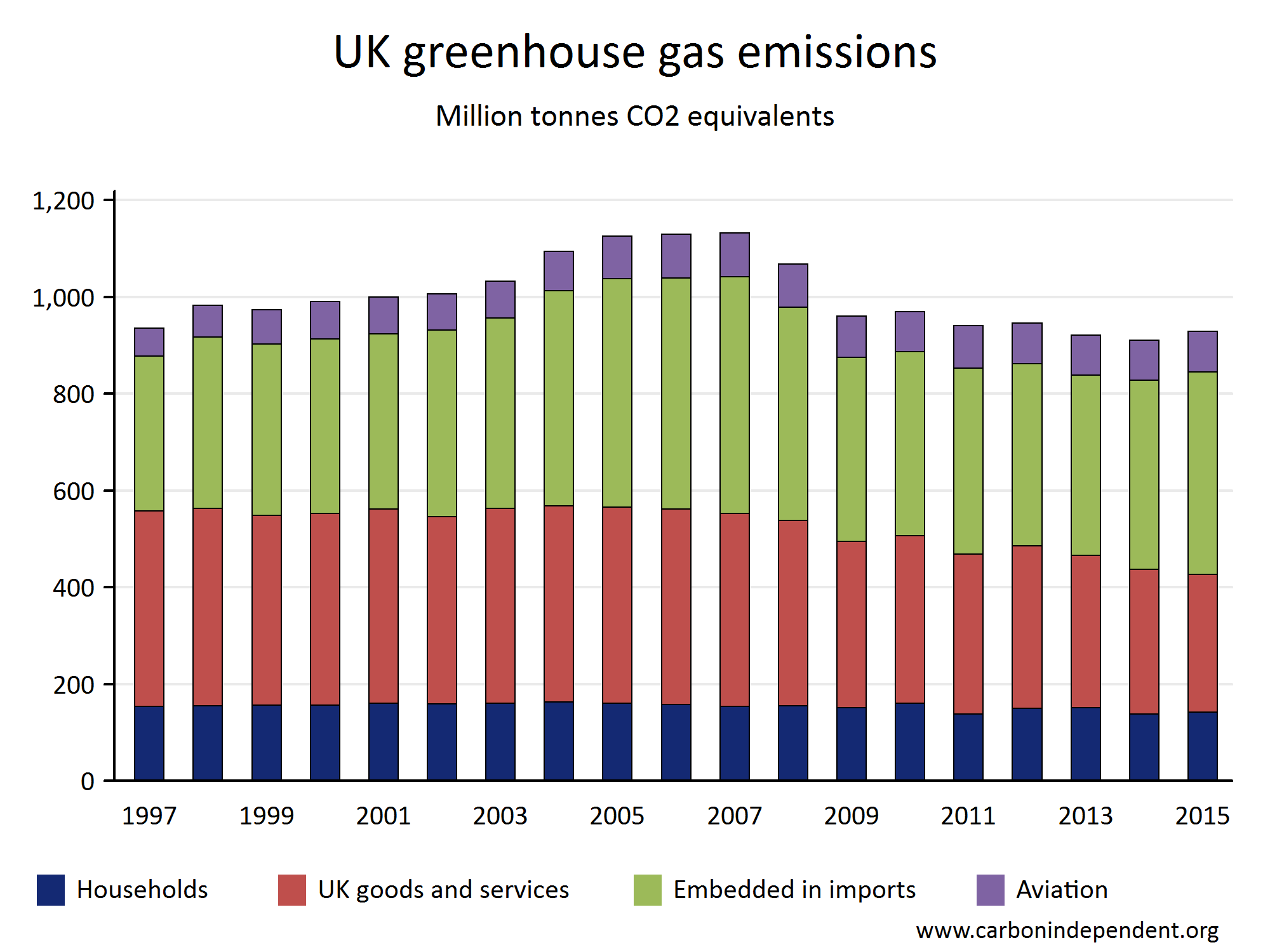 This image is not copyrighted - it can be distributed freely. No permission is required.

Embedded in imports: GHG from the production of goods and services imported into the UK.

Aviation: GHG from UK residents flying to and from the UK.

The GHG emissions generated within the UK have fallen from 1997 to 2015, but the total embedded in imports has risen by a similar amount. This is due to the transfer of much manufacturing from the UK to other countries, especially China.

The UK Government often makes claims that the UK has reduced its carbon emissions by a large percentage, and even claims to be a world leader - but this is not a fair summary of the data and appears to be deliberately deceitful.

There has also been a switch in the fuel used for UK electricity production, from coal to gas, and the UK Government often claims credit for this, but major factors in the switch have been an EU directive on air quality (burning coal produces more particulate pollution), and the cheaper price of gas.

In summary, the claims of the UK government are misleading and appear to be deliberately deceitful. See also BEIS is not telling the truth on carbon emissions at https://www.carbonindependent.org/85.html.

The UK is, however, very special. Not only for its mind-blowing historical carbon debt, but also for its current, very creative, carbon accounting.

Since 1990 the UK has achieved a 37% reduction of its territorial CO2 emissions, according to the Global Carbon Project. And that does sound very impressive. But these numbers do not include emissions from aviation, shipping and those associated with imports and exports. If these numbers are included the reduction is around 10% since 1990 – or an an average of 0.4% a year, according to Tyndall Manchester.

And the main reason for this reduction is not a consequence of climate policies, but rather a 2001 EU directive on air quality that essentially forced the UK to close down its very old and extremely dirty coal power plants and replace them with less dirty gas power stations.

Data for the first three catagories is from DEFRA - see https://assets.publishing.service.gov.uk/government/uploads/system/uploads/attachment_data/file/704607/Consumption_emissions_May18.pdf and https://www.gov.uk/government/uploads/system/uploads/attachment_data/file/704425/UK-Carbon_Footprint_1997_2015.ods.

The data for aviation is from the BEIS file https://www.ons.gov.uk/file?uri=/economy/environmentalaccounts/datasets/ukenvironmentalaccountsfuelusebytypeandindustry/current/fuelusebytypeandindustry.xls. Figures for CO2 production are adjusted by a radiative forcing factor of 1.9, together with a factor of 1.25 to allow for the relative proportion (resident/foreign) of passengers passing through UK airports - see https://www.carbonindependent.org/22.html.